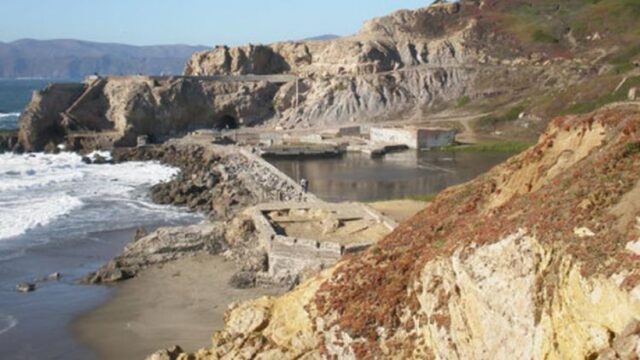 For the people who visit the Cliff House and Land’s End in San Francisco, there are often unanswered questions about the concrete ruins that lie directly north of the landmark restaurant and look-out to the Pacific Ocean. There are barbed pieced of rusting iron that looked like they once were part of a gigantic building and deteriorating slabs of cement staircases that lead to – well, nowhere now.

Now, these are definitely ruined in every sense of the word, because once upon a time, when old two-man streetcars used to run up and down the city’s grand Geary Blvd., this was the site of Sutro Baths, a gigantic indoor swimming complex that was an aquatic playland of sorts for San Francisco.

It was the brainchild of Adolf Sutro – the former eccentric Mayor of San Francisco from 1894 to 1897 – who dreamed up the idea of building his very own indoor pool right on the ocean. Every morning millions of gallons of ocean water were pumped into seven swimming pools, some of them heated. When it opened in 1896, it was the largest indoor public bathhouse of its kind.

People came to the pools in droves – seizing the opportunity to swim in heated ocean water pools. But by the mid 20th Century, fears of polio and other waterborne diseases kept folks at home. Coupled with the high cost of maintaining the gigantic structure, Sutro Baths closed in 1954.

As the structure was being demolished more than a decade later in 1966, a devastating fire broke out on the

bathhouse grounds. By the time it was put out, Sutro Baths was a total loss.

Today, the swimming pools’ ruins are visible and accessible to the public. The property is owned and managed by the National Parks Service. Be forewarned that for those who are less nimble on their feet, stay on the marked trails because people have fallen off the steep cliffs and have been washed off-shore by ocean tides.

Tripping hazards are abundant too along with the ruins, so watch your step

This is one tourist-trodden destination of San Francisco where emergency personnel performs dozens of cliff rescues every year.

Now that you’ve been warned, soak in the amazing sight of what was once an integral piece of San Francisco history. From the magnificent Cliff House restaurant and the sweeping views of the entire stretch of the city’s Ocean Beach, this part of Land’s End is another reason why visitors keep coming back to the city.

It’s a great morning jogging path, a scenic place to go have a fancy meal and a site where you can hike through the stepping stones of the site of a San Francisco historical site.