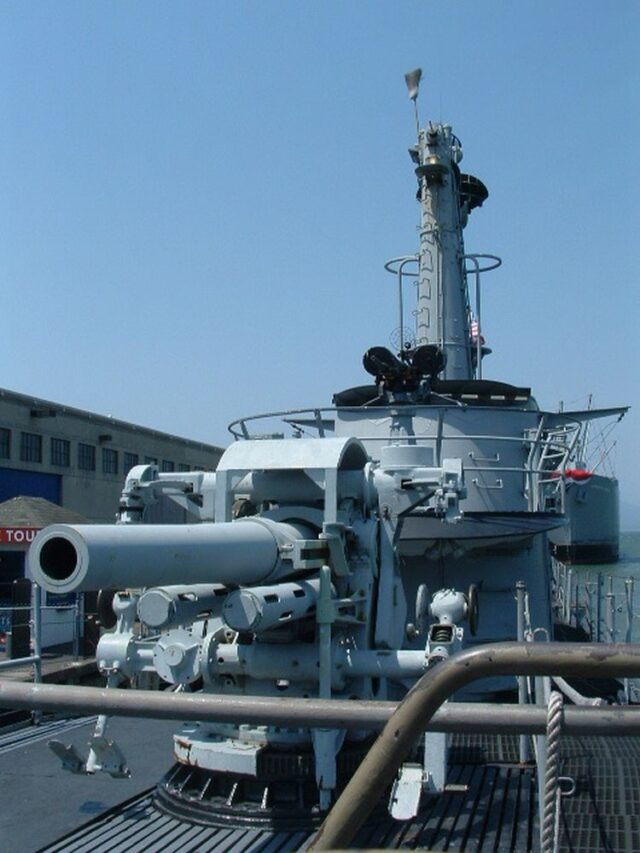 During the Second World War, perhaps no branch of the United States Navy held as much difficulty and danger than that of the submarine service. While it was the smallest branch in the Navy, the submarine service would at war’s end have the largest casualty percentage of any military service. While there really is no way of truly understanding the risks the service carried with it unless you actually lived it, you can get a small glimpse by visiting one of the wartime submarines. Moored along San Francisco’s Pier 45, is a chance to do just that with the U.S.S. Pampanito.

Built and commissioned at the Portsmouth Naval Shipyard in New Hampshire in 1943, the U.S.S. Pampanito is a distinguished combat veteran of the war. The Balao class diesel submarine made a total of six combat patrols in the Pacific theater and would sink or destroy ten Japanese vessels. In 1986, she was designated a National Historic Landmark.

The normal admission fee to board the Pampanito is $8, but there are discounted prices for children,

Looking at her from the pier, you may recognize the U.S.S. Pampanito from the big screen. In fact, she played the role of the fictional submarine U.S.S. Stingray in the 1995 comedy movie “Down Periscope” starring Kelsey Grammer.

Once aboard the submarine, you will be guided by ropes to the rear hatch where you will descend the ladder into the rear torpedo room. From here you will travel through the compartments until you reach the forward torpedo room and the hatch exit back to the deck. Among the rooms, you will see include the engine rooms, living quarters, and control room.

As you pass through the officer’s quarters, you will notice the nameplates next to the entrance of each room. These are the names of the actual officers who served on Pampanito during the war. Especially take note of the quarters of Cdr. Paul Edward Summers who commanded Pampanito for most of the war. Even though he was commanding officer, his quarters were not much bigger than the others.

A note of caution, however. As you move from each compartment as the hatchways are small and you can easily bump your head or trip if you’re not careful.

As you travel through her, you will be struck by the fact of just how small and tight the passages and compartments are. You can’t help but think about what the men who served aboard her during wartime had to go through on a daily basis during patrols that could last over two months.

From the forward torpedo room, you will climb up the ladder and onto the deck to be again guided by ropes back off the vessel. Along here you will get to see Pampanito’s deck guns up close and personal.

U.S.S. Pampanito is a historical treasure for anyone who wants to learn about World War Two and want to be as close as possible to experiencing what it was like to serve below the water line during the war. It also serves as a remembrance to the men who served, and in some cases died, with the submarine service. Thus I highly recommend a visit to the U.S.S. Pampanito for everyone, whether you’re a history buff or not.