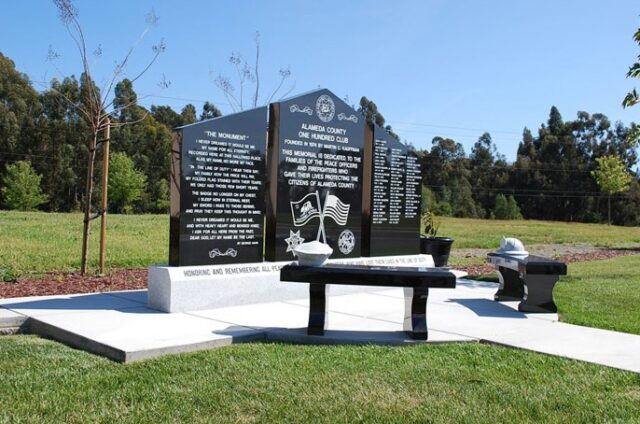 Tucked away in the back of Hayward’s Lone Tree Cemetery is a special memorial. This memorial isn’t dedicated to any one individual or to any specific event, but instead, it is dedicated to remembering the names of Alameda County’s fallen heroes. Sadly, the Fallen Officer and Firefighter Memorial carry a list of names that is still being added to today.

Lone Tree Cemetery is located at 24591 Fairview Ave. The memorial is located at the newly developed area at the back of the cemetery.

Erected by the Martin C. Kauffman Alameda County One Hundred Club in 2008, the Fallen Officer and Firefighter memorial honors the police officers and firefighters who have given their lives in the line of duty. On one side of the memorial is the touching poem, “The Monument,” written by Sgt. George Hahn (Ret.) of the Los Angeles Police Department. On the other side are the inscribed names of fallen officers and firefighters from Alameda County, starting from 1973.

These are the names of the officers and firefighters who are remembered:

At the time of our visit, thirty-five names were on the monument. Soon, four more names from the Oakland Police Department will be added to this memorial: Sgt. Mark Dunkin, Sgt. Ervin Romans, Sgt. Daniel Sakai, and Off. John Hege.

“I never dreamed it would be me;

And with a heavy heart and bended knee;

I ask for all here from the past;

Dear God, let my name be the last.”

What are Fund Recovery Services and How do They Work

Jon Djokovic - December 2, 2021 0
Each of us has been the target of online scammers at least once in our lives, and the fact that we have spent almost...

What Kind of Sex Dolls are Most Popular

What are Fund Recovery Services and How do They Work