Caltrans said Friday afternoon that emergency repairs to replace a broken part of the eyebar reinforcement installed over Labor Day weekend would “go into the weekend” and that the bridge would not be open for the Friday afternoon commute.

Caltrans spokesperson Bart Ney said that repair work was still ongoing and could not give an estimated time of reopening, even leaving open the possibility that the bridge might not open in time for the Monday morning commute.

Engineers and construction workers have been working around the clock as they replace steel tierods and make modifications to the fix for a cracked eyebar that was installed during the bridge closure on Labor Day weekend.

Ney said that work crews were currently trying to position the newly installed tierods in place so that they didn’t shift once placed under load.

He disputed assertions that there had been a delay in the process, saying that the process itself was under “constant modification” due to the unique nature of the work.

Caltrans spokesperson Bob Haus said Friday morning that, once repair work had finished, at least three hours of testing and two hours of cleanup work would be needed before the bridge could be reopened to traffic.

California Department of Business, Transportation, and Housing secretary Dale Bonner insisted Thursday that inspectors would have “all the time they need” to make sure the bridge is safe before the span is opened.

With the bridge closure set to extend into another day, transit agencies will continue offering expanded service.

BART will run longer trains from the start of service and add trips during off-peak hours to accommodate extra demand. Limited overnight service to 14 stations will be offered Friday night, and if the closure continues that long, Saturday night as well.

BART is asking passengers to avoid peak travel times (7-9 a.m.) and take transit to stations or get dropped off there, if possible.

AC Transit’s Transbay buses will be rerouted to East Bay BART stations instead of crossing the Bay Bridge, but the agency otherwise plans a regular weekday schedule.

Service on the Oakland-Alameda and Harbor Bay ferry services to and from the East Bay will be increased, and the Larkspur ferry service will have an additional ferry available to accommodate demand.

The continued bridge closure comes as a disappointment to commuters around the region, who have suffered two days of commute chaos caused by the bridge closure.

The Bay Bridge has been closed to traffic since Tuesday evening, after two steel tierods and a crossbar that formed part of the reinforcement for a cracked eyebar on the eastern span fell onto the bridge deck at the height of the evening commute, striking three vehicles. Somehow, no one was injured.

The resulting closure clogged alternate routes across the Bay from Highway 37 in the north to the San Mateo Bridge during both the morning and evening commute. Transit agencies saw record loads and full parking lots.

Caltrans and contractor officials said that the failure was caused by the metal tierods in the original repair vibrating in place, causing metal fatigue — damage similar to repeatedly bending a paper clip back and forth.

High winds on the span, which create additional vibrations in the structure, may have contributed to the break.

Caltrans said that it’s making changes to prevent the structure from breaking again, and to keep components from falling even if parts fail.

Welds will be strengthened to couple the system more tightly to the eyebar, dampers will be installed to reduce vibration, and the holes in which the tierods are mounted will be modified to keep the rods centered in place.

Third-party inspectors, including a team from the Federal Highway Administration, have reviewed plans for the repair, and will inspect the span before the reopening to ensure that the bridge is safe.

Caltrans has said the outside inspectors want to examine the completed repair and how it responds to load, including vibrations, before approving the reopening of the span.

Repairs will be paid for by Caltrans out of emergency funds.

In a steel truss cantilever bridge like the eastern span of the Bay Bridge, the steel beams which make up the superstructure form two lever arms anchored at the ends of the bridge, which support the weight of a span in the middle.

When a beam fails, the load is redistributed onto other parts of the structure, resulting in a significantly weaker bridge. As long as the remaining good components can bear the strain, though, the structure will not collapse.

Bonner said that, even with the cracked eyebar unreinforced, the bridge was “not anywhere near to a catastrophic failure.” 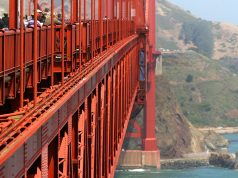 Man detained after threatening to jump from Bay Bridge 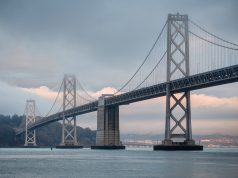