A three-judge panel of the Ninth Circuit Court of Appeals heard oral arguments in San Francisco today on the question of whether a lower court ruling that California’s voter-approved ban on gay marriage is unconstitutional should be allowed to stand.

The two-and-a-half hour hearing was televised live nationwide on C-SPAN, affording viewers a rare chance to watch the judges pressing both sides on questions such as whether Proposition 8 has any rational basis.

These are the updates we put out during the arguments.

UPDATE 12:46 PST — Hearing has concluded. We’ll have a complete story up soon on the website.

UPDATE 12:40 PST — Stewart argues that Prop 8 is “inexplicable by anything other than animus towards” gay and lesbian couples. Charles Cooper returns for a rebuttal.

Stewart says that Proposition 8 has nothing to do with California’s regulations on family and childrearing, which she says treat same-sex and opposite-sex couples the same way.

UPDATE 12:31 PST — Olson closes by saying “California has built a fence around its gay and lesbian citizens” which denies them access to marriage, calling this a violation of the equal protection and due process clauses. Reinhardt asks whether the court is able to go beyond ruling that California’s repeal of gay marriage is unconstitutional, to rule that banning gay marriage is itself unconstitutional; Olson encourages the appeals court to do so. UPDATE 12:25 PST — Hawkins asks whether any rational basis can be conceived for Proposition 8; Olson argues that satisfying rational basis review requires more than just thinking up a basis, but says he cannot think of any. Smith asks Olson about Proposition 8 proponents’ argument that opposite-sex marriage promotes “responsible procreation.” Olson says that argument is “flatly inconsistent with the evidence,” but Smith says that’s only true if the evidence includes only the evidence presented before the trial conducted by Walker.

Olson then says that banning same-sex marriage is not an appropriate remedy for promoting responsible procreation because it won’t change where children are raised.

UPDATE 12:16 PST — Olson criticizes Prop 8 proponents’ original ballot arguments that prohibiting same-sex marriage would protect children from becoming “prematurely preoccupied with sexuality,” saying that it would allow the state to ban everything from comic books to conversations with other children.

Olson disagrees with Cooper, saying that it does make a difference that existing rights are taken away by Proposition 8.

UPDATE 12:02 PST — Cooper says that infertile couples can get married because the required tests to check for fertility would be “Orwellian” and violate the constitutional rights of those getting married.

UPDATE 11:50 PST — Cooper argues that the fact that gay marriages were permitted in California before Proposition 8 was passed should have no bearing on whether Proposition 8 is constitutional. Reinhardt expresses doubt over whether that’s a settled question in the law.

UPDATE 11:44 PST — Cooper says eight other courts have rejected claims that gay couples should be allowed to marry under the 14th Amendment. Reinhardt points out that none of these were after Romer v. Evans or Lawrence v. Texas, and none of them addressed repealing an existing right.

Cooper draws an analogy between Proposition 8 and the appeals process, saying that it is like an appeal of the California Supreme Court ruling permitting gay marriage to the people, whom he says are the supreme authority in California’s political system.

UPDATE 11:39 PST — The judges question Cooper as to why the Supreme Court’s decision in Romer v. Evans, a 1996 case where the Court ruled a Colorado law which prevented the state from giving gay or lesbian couples any protection was unconstitutional, does not apply here. Cooper argues that that Colorado law was unprecedented, whereas traditional marriage is not.

UPDATE 11:34 PST — Smith asks Cooper what rational basis exists for prohibiting marriage to same-sex couples when they have all of the rights of marriage under domestic partnerships in California already. “If you redefine the word, you change the institution,” Cooper replies.

UPDATE 11:31 PST — Cooper argues that “if there is any rational basis for the […] traditional definition” of marriage, it must be upheld. He says that society is “threatened” by the possibility of single motherhood, suggesting that this is a rational basis for opposite-sex marriage.

Reinhardt: “that sounds like a good argument for prohibiting divorce.”

UPDATE 11:27 PST — Cooper begins his argument on the merits by asking whether voters or courts should decide whether same-sex marriage is allowed. Hawkins interrupts, asking whether voters could reinstitute school segregation; Cooper answers no. Hawkins then points out that they would have been able to in 1870 (before Brown v. Board of Education).

UPDATE 11:08 PST — Court is now in recess. Cooper urges the appeals court to take up its suggestion of asking the California Supreme Court to rule on the standing issue, if it’s not willing to find directly that Proposition 8 sponsors have standing to appeal. That concludes the session on standing; the judges will hear arguments on the merits after a short break.

UPDATE 10:58 PST — Hawkins suggests that it would be better to grant everyone standing and settle the question in one place. Boies replies that the Supreme Court has said that judges “must put aside the natural urge” to do that when considering standing issues.

UPDATE 10:47 PST — Reinhardt raises the possibility of asking the California Supreme Court directly whether proponents have

standing to appeal. Boies suggests that would be appropriate if the law is “unclear,” but says that he believes that the law is clear that they do not.

UPDATE 10:41 PST — Smith asks whether the governor and attorney general’s refusal to appeal have “nullified” an inititiave that they could not otherwise override or amend.

UDPATE 10:36 PST — David Boies, attorney for the plaintiffs, argues that Judge Walker’s ruling binds only the named defendants — the clerks of Alameda and Los Angeles County, and the governor and attorney general. He says that it is the attorney general’s responsibility to ensure that the laws are “uniform” by enforcing the ruling on the other counties in the state.

UPDATE 10:25 PST — Reinhardt to Tyler: “When you’re asked a question and you don’t know the answer, say so!”

UPDATE 10:20 PST — The panel questions Tyler on whether the deputy clerk has standing. Judge Smith refers to cases that say that deputies are “mere agents” of the principal officer, suggesting that the deputy clerk does not have standing to appeal.

UPDATE 10:11 PST — Prop. 8 supporters’ attorney, Charles Cooper, argues that Karcher v. May, a New Jersey case, shows that the state has the ability to give the measure’s sponsors standing to appeal in federal court, and that the California Supreme Court has done so.

But the panel points out that Karcher v. May was decided before Arizonans for Official English v. Arizona and so could not have anticipated the ruling in that case expressing “grave doubts” over whether initiative proponents have standing to appeal.

SAN FRANCISCO — The historic appeal of California’s Proposition 8 — a voter-approved 2008 initiative that bans same-sex marriage — will be heard in the United States Ninth Circuit Court of Appeals Monday.

Supporters of Prop. 8 and its opponents will argue, in a unprecedented 2 1/2 hour session about why the law should stand, or be struck down.

A panel of three appellate court judges including Judge Michael Hawkins, a moderate, Judge Stephen Reinhardt, a liberal, and Judge N. Randy Smith, a conservative, will hear the case.

US District Court Judge Vaughn Walker ruled Proposition 8 unconstitutional in August, saying that Proposition 8 violates the due process and equal protection clauses of the Constitution by denying gays and lesbians the right to marry a member of the same sex.

The measure’s opponents argue that the decision should stand. “There is no good reason — indeed, not even a rational basis — for California to exclude gay men and lesbians from the institution of civil marriage, the most important relation in life,” lawyers for the couples who brought the original suit said in a filing.

But even before the appeals court reaches the question of whether Proposition 8 is actually unconstitutional, it must decide whether Proposition 8’s backers actually have standing to appeal Walker’s ruling. The panel of judges who decided to take up the case — a different panel than the one hearing today’s arguments — directed the measure’s sponsors to “include in their opening brief a discussion of why this appeal should not be dismissed for lack of Article III standing,” citing Arizonans For Official English v. Arizona, a 1997 Supreme Court ruling where the high court expressed “grave doubts” about whether the sponsors of an Arizona ballot initiative had standing to appeal a ruling on the constitutionality of the measure.

Outgoing Gov. Arnold Schwarzenegger and Attorney General — now Governor-elect — Jerry Brown have refused to defend Proposition 8 in court, so if the appeals court rules that Proposition 8’s backers do not have standing to appeal, it’s possible no one will be able to appeal Walker’s ruling.

Same-sex marriage opponents argue that previous California Supreme Court rulings, including one specifically permitting them to defend Proposition 8 in state court, give them standing to appeal.

The first hour of today’s hearing will be devoted specifically to arguments on the standing issue. We expect a short break after, followed by arguments on whether Proposition 8 is unconstitutional. The hearing is scheduled to end around 12:30 p.m. 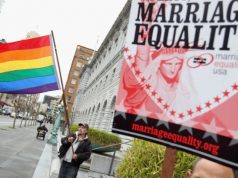