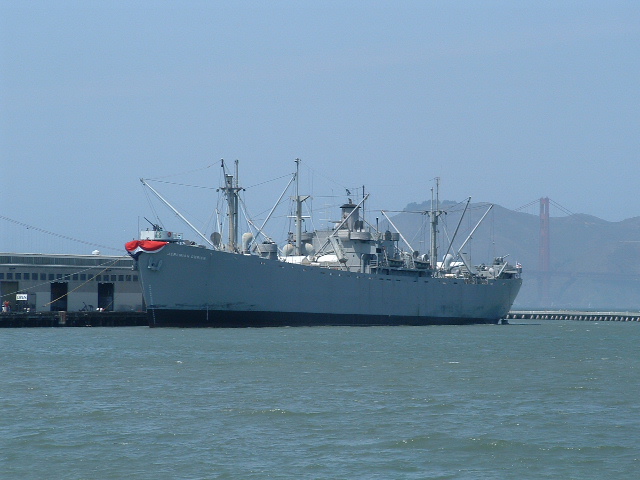 After last year’s Parade of Ships was canceled, Fleet Week organizers are crossing their fingers that the rough seas will calm a bit this year so that three vessels sailing in from across the globe can make it under the Golden Gate on-time.

There will be a total of four ships participating in this year’s Parade of Ships during Fleet Week festivities. Among them: a Canadian Naval ship, the HMCS Edmonton, two American military ships, the USS Green Bay and a Coast Guard cutter, the CGC Boutwell, and an old merchant marine ship, the S.S. Jeremiah O’Brien that’s actually moored in San Francisco.

In August 2008, The California Beat’s Military Historian Roy Morlidge went on board the ship and discovered why it plays such an important role in connecting the present with the wartime past.

The Second World War was an important time in the development of San Francisco Bay Area. With it’s proximity to the Pacific Theater, military bases were quickly mobilized and placed on alert. In addition, the bay made for an excellent place for wartime industries to kick up production of supplies and equipment. For many young men bound for service in the Pacific, San Francisco would be their last view of the continental United States until war’s end.

Many of the wartime sites are silent now. Some are gone while others are crumbling away. However moored at Pier 45 in San Francisco, the Liberty shipS.S. Jeremiah O’Brien still actively sails as a reminder of the past.

Easy and quick to build, the whole purpose of the Liberty ship was to carry supplies from the states to the Allied forces fighting in the European and Pacific Theaters. Manned by the U.S. Merchant Marine and Naval Armed Guards, the Liberty ships are often credited as being a major factor in the Allied victory during the war.

While the San Francisco Bay Area was a major building location for Liberty Ships, the S.S. Jeremiah O’Brien was built in Portland, Maine in 1943. In her career, she made several supply trips and would serve during the Battle for Normandy in June 1944. Today a Registered National Historic Landmark, she is one of only two surviving Liberty ships still in operation.

Once you pay the admission fee, you will be handed a self-guided tour pamphlet which suggests the best route to see the ship. I personally would recommend following the guide on the pamphlet since so much of the ship can be visited, you can easily miss something. Among the more interesting places aboard ship are the wheel house, the cargo holds, and the engine room. You will end your visit down in the ships cargo holds where you can find a museum and gift shop.

A few tips about the engine room. Be very careful as you climb the ladders as they are steep and falling down them would most likely not feel very good. Also, since this is an active ship try not to touch any of the equipment there. Once you have climbed down, you just might recognize it as being where the engine room scenes for the 1997 blockbuster movie “Titanic” were filmed.

Today, the S.S. Jeremiah still remains an active sailing vessel. With her all-volunteer crew, O’Brien makes several cruises each year. Tickets for the cruise are available, but in keep in mind that tickets are not cheap and must be purchased before the cruise.

The S.S. Jeremiah O’Brien stands as a tribute to the work and accomplishments of all the Liberty ships during the war. That combined with the ship’s individual service make it an interesting place to visit. I especially recommend the O’Brien for military and naval buffs.