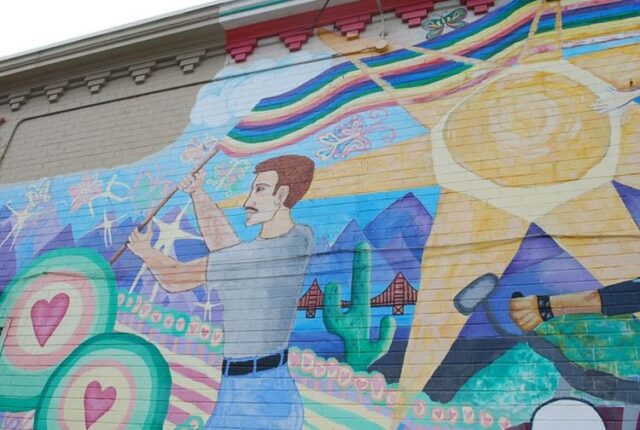 The city of San Francisco is made up of many colorful neighborhoods, each with its own unique characteristics and history. But one district stands out more than the rest. It is a district that no matter where you’re from, you’ve heard of it. It is a district that is colorful not only by the people who live, but literally by the flags that fly all along its main street. Regardless of how you feel about, the Castro District has become a uniquely San Francisco neighborhood.

One can find many different types of businesses and establishments located throughout the district. From the many Asian restaurants along Castro Street to several bars and clubs that make up the local nightlife. There are even the occasional adult-themed stores for those who may be into that sort of thing.

Perhaps the most recognizable building in the Castro is the Castro Theatre, located at 429 Castro St. Designed in 1922 by San Francisco architect Timothy L. Pflueger, the Theatre today remains an icon of the city and very much in use. Walking past it today, you can still see banners advertising upcoming shows and at night, the beautiful neon sign still shines brightly enough that you can see it clearly from the Twin Peaks lookout point.

Speaking of Twin Peaks, another local landmark is the Twin Peaks Tavern at 401 Castro St. This tavern stands out in LGBT history as being the first gay bar to have large, open glass windows allowing those passing by to easily look in and see patrons inside.

Inevitably when you talk about the Castro and LGBT San Francisco, you will probably find some mention of Harvey Milk. Though he was assassinated thirty years ago, references and tributes to Milk’s legacy can still be found all around the Castro.

The largest of these comes in the form of Harvey Milk Plaza at the entrance of the Castro Street Muni Metro Station at the corner of Castro and 17th Streets. Located here is a plaque in Milk’s memory as well as several photographs of his life. Flying proudly over the intersection as well is the large rainbow flag that has come to symbolize the neighborhood.

Another tribute to Milk is Harvey’s at 500 Castro St. on the intersection of 18th. First opened in 1975 as the Elephant Walk, the location has ultimately become best known for events that occurred after the Supervisor’s assassination. On March 1, 1979, following the White Night Riots that erupted outside of City Hall after the manslaughter conviction of Dan White, San Francisco Police Officers retaliated by attacking the Elephant Walk. At 4235 19th Street is a tribute of another kind, the Harvey Milk Civil Rights Academy. Renamed in Milk’s honor in 1996, this elementary school features a stunning mural well worth stopping to see.

The one building, however, which is most associated with Milk is at 573-575 Castro St. In 1973, this would be the building which Harvey Milk and then lover Scott Smith would move into and establish Castro Camera, the shop that became his campaign headquarters. Today the shop is far different from how once looked, but is painted in tribute to the late Supervisor and a memorial plaque in his honor was placed in the sidewalk in front of the shop. As walk by, remember to look up and you’ll see Milk’s smiling face will be looking back down at you.

But not all of the Castro’s LGBT history is centered on Harvey Milk. At 499 Castro is the Castro Branch of the LGBT historical Society Museum. The museum is open Wednesday through Saturday from 12 until 8 and on Sunday from 12 to 6.

Nearby is a plaque dedicated to the memory of Air Force Tech. Sgt. Leonard Matlovich, a gay veteran of the Vietnam War and recipient of the Purple Heart and Bronze Star who was discharged after he came out. He would capture nationwide attention when he chose to fight against his discharge.

On the corner of 17th and Market is the Pink Triangle Park and Memorial. Dedicated in June 2003, the park honors the LGBT victims of the holocaust during World War Two.

A short walk away from the main area of Castro Street at the corner of 16th and Market is a tribute to another hero of the LGBT community. In the 1960’s, José Sarria would step up to become the leading figure of the gay movement in San Francisco and would earn the honor of being the first openly gay candidate for political office in the United States when he ran for the San Francisco Board of Supervisors in 1961. He is better known, however, for when he declared himself Empress José I, the Widow Norton.

In his honor, this section of 16th Street was named José Sarria Court in 2006 and a plaque was placed in the sidewalk. Nearby to this plaque, at 1 José Sarria Court, is the Eureka Valley/Harvey Milk Memorial Branch Library, which is right now closed for renovation. Be sure to take a moment to admire the large mural painted on the wall of the building across the street.

Regardless how you feel about the Castro or the LGBT movement, one cannot deny that this place has its own unique culture with its own unique heroes. There are just some places that you can’t truly say you have experienced San Francisco unless you visit and this community is one of them. And to experience life in the Castro is something I highly recommend to everyone.