Outer Sunset commuters in San Francisco who have grown accustomed to crowded cars and long delays aboard the N-Judah MUNI Metro streetcar line can expect some relief come June 13 — for a six-month trial period — in the form of a bus.

MUNI will begin a pilot project to increase capacity on the busy Metro line during weekday commute hours by instituting an N-Judah Express bus line, which the transit agency says will relieve severe overcrowding.

During morning commute hours, the N-Judah Express buses will pick passengers up at 11 Outer Sunset stops on Judah Street between the 48th and 19th Avenues, then travel nonstop into the Financial District via Lincoln Way, the Panhandle, Masonic Ave. and Bush Street.

In the afternoon, the line will pick up passengers at Sutter and Sansome Streets and operate via Sutter St., Geary Blvd. and Park Presidio Blvd. to 19th Avenue, from where it will run as a local route to a terminal at the Great Highway.

MUNI will paint up to 15 buses pulled from its reserve fleet in special colors and apply “N-Judah Express” decals to the outside of the vehicles. Scrolling head signs on the front of the bus will also give passengers information about the first and last stops in on the route’s express zone.

The agency also plans on putting up route maps inside the bus to give passengers stop information.

Regulars of the N-Judah have complained bitterly for decades about capacity and reliability issues with the route. At 38,000 boardings every weekday, the route is the busiest rail line in the city, serving as a direct link between San Francisco’s downtown core and the Cole Valley and Sunset Districts.

Despite two-car trains scheduled to run every five minutes during commute hours, riders still complain about being left behind at stops because of full trains.

The problem is especially pronounced on the Cole Valley portions of the line during morning commute hours when downtown-bound trains are often fully loaded with passengers who boarded the train in the Sunset District.

For years, MUNI has attempted to address capacity and reliability issues with their most popular rail line, including exploring a “skip-stop service” where trains would serve every other stop and major transfer points. The concept was never implemented, but nonetheless, destination signs on older Metro streetcars retain markings for N-Judah trains serving “A-Stops” or “B-Stops.”

The agency also built a raised trackway on Judah Street between 9th and 19th Avenues to provide a quasi-exclusive right-of-way for trains along the often congested corridor.

However, plans to expand the raised median trackway for the entire length of Judah Street were scrapped after neighbors complained that they were unable to make U-turns and access their driveways because of the elevated roadbed.

The implementation of an N-Judah Express bus is MUNI’s latest attempt at finding a lasting solution to improve transit service on the line. 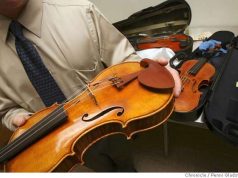 Rare $23,000 violin stolen by thief who makes getaway on MUNI

TALK BACK: How was your first week at the new Temporary Transbay Terminal? 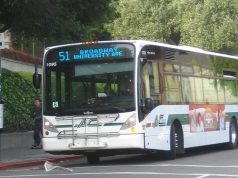