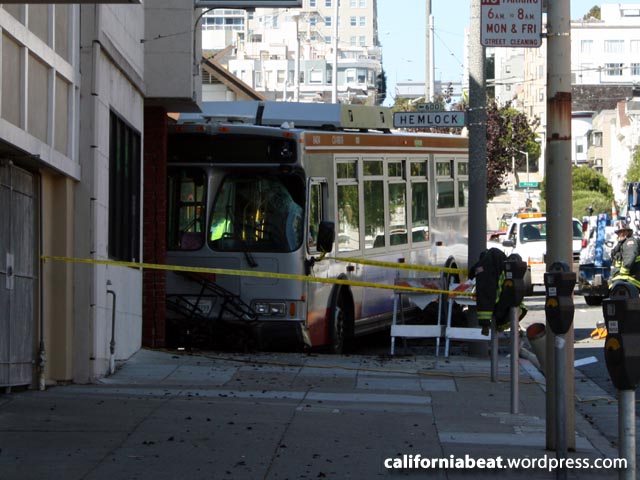 A MUNI bus being driven by an operator undergoing training wiped out a light pole, parking meters and two trees before it slammed into the side of a building on Laguna Street between Post and Sutter Sts. in San Francisco Japantown Tuesday afternoon.

No one was injured in the crash, but traffic was snarled for hours as fire crews and MUNI officials blocked off Laguna Street to tow the disabled bus off the sidewalk where it came to a rest.

There was some damage to the exterior of the bus, Hybrid motor coach #8404 including the bent-up bike rack on the front of the bus and a shattered front windshield.

Passersby were astonished to see the sight: a 40-foot MUNI bus resting against the building. Damage to the structure appeared to be minimal.

A big-rig tow truck arrived at around 3:00 p.m. to haul to bus off the sidewalk and back to the bus barn.

Several MUNI routes, including the 3-Jackson, were rerouted for several hours because of the street closure.

There was another MUNI accident Tuesday morning between a 71 Haight-Noriega bus and an F-Market streetcar. No serious injuries or damage was reported in that incident.