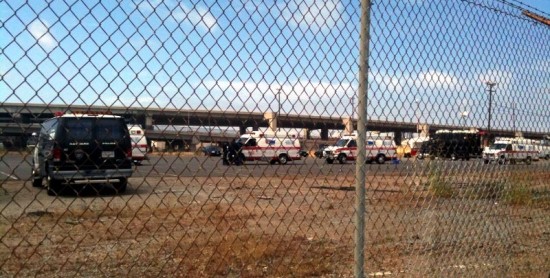 Today, hundreds of officers from law enforcement agencies throughout the Bay Area staged a practice drill near the Port of Oakland to refresh crowd control techniques and prepare officers for civil disobedience the city could see pending the outcome of the case, which was moved to Los Angeles County after Mehserle’s defense argued he could not receive a fair trial in Alameda County.

The training event allowed officers to participate in a mock riot situation with smoke bombs used to simulate tear gas. Communications equipment from surrounding agencies was also tested in case Oakland Police need the assistance of other police agencies in the Bay Area.

Oakland Police also began reaching out to businesses in the city today, telling many small business owners who were targeted in the rioting that followed the January 1, 2009 shooting that the department would be working to protect property and mitigate the impact of any potential violent protests.

The preparations for a law enforcement response to the verdict have been months in the making, Oakland Police said.

Anarchist groups have already begun to organize online, calling for protests on the day of the verdict.

“This trial’s verdict brings hella potential to spread anarchy,” one website writes. “Let’s seize this historic moment and start a chain reaction to win this struggle — not in some f– court house, but where it matters — in the streets!”

Other groups have called for an assembly at 14th and Broadway Streets at 6 p.m. on the day the verdict is announced.

Police said Friday they plan to be there too — in force.