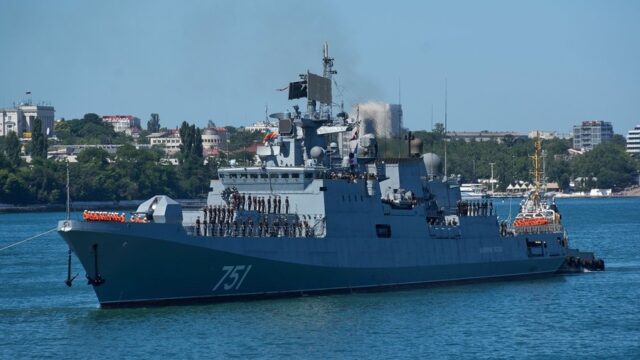 The flagship of the Russian Navy’s Pacific fleet — the warship Varyag — sailed into San Francisco Bay and docked at Pier 30-32 along the Embarcadero Monday morning for a week-long stay in the city that coincides with a Presidential visit to the Bay Area by Russia’s head of state Dmitry Medvedev.

Medvedev arrived in the Bay Area Tuesday evening to meet with Gov. Arnold Schwarzenegger and Mayor Gavin Newsom at the Fairmont Hotel in San Francisco. The Russian President will tour Cisco Systems, speak at Stanford University and visit with Google executives on Wednesday before he departs for Washington D.C. to meet with President Obama. Medvedev is hoping to cultivate a technological boom in Russia to bolster the country’s economic standing — one still looking for growth under capitalist philosophy. He is looking towards Silicon Valley and the Bay Area’s tech sector for cues on how to support such growth in his country.

At Pier 30-32, the Varyag — a Cold War era wartime vessel — still retains a Communist Red star on the bow of the ship, but Russian sailors who ventured out into San Francisco today might as well have been tourists from Moscow. Many were toting smartphone cameras to photograph Coit Tower, the Cable Cars and the Ferry Building. A few were struck by the hustle and bustle of the Financial District during the lunch hour.

The ship will remain docked along the Embarcadero until Friday when it starts the journey back to Russia.

Public tours of the ship will be available on Thursday starting at 10 a.m. until 1 p.m. The guided tours will be free.