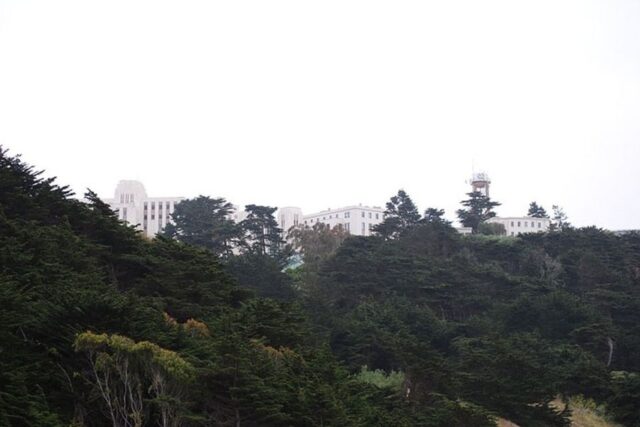 A while back, the California Beat published the top five locations to photograph the Golden Gate Bridge. Shortly afterward, a comment was left on that article by ‘Bob in Pacifica,’ who suggested that San Francisco’s Fort Miley was another good location to photograph San Francisco’s most famous landmark. So, the California Beat decided that we should check out the location ourselves to see if it should indeed be included on our previously mentioned list.

Fort Miley is located at Land’s End on the north side of Clement St. directly next to the Lincoln Park Municipal Golf Course. Parking can easily be found at the end of El Camino del Mar and all trails can be reached from this point.

Fort Miley was first acquired by the military in the early 1890’s due to its location being an excellent defensive location to protect the entrance of the San Francisco Bay and ultimately the city of San Francisco itself. Construction began in 1899 and in 1900; the fort was officially named after Lt. Colonel John David Miley. A distinguished veteran of the Spanish American War who had served as aide-de-camp to Maj. General William Rufus Shafter, Miley had died in September 1899 in the Philippines. Interestingly, Lt. Colonel Miley was laid to rest just up the coast from the fort at the Presidio’s San Francisco National Cemetery.

Given its strategic location, Fort Miley was home to several gun batteries, some of which can still be seen today. The best example of these is Battery Chester, located on the western side of the fort. Though sealed up, walking along the structure can still give visitors a chance to imagine what it was like to once be stationed here as a soldier. If the weather is good, a nearby picnic area can make Battery Chester a great place to spend the day.

Across the hospital and on the east side of the fort once can find the remains of two more batteries, Battery Livingston and Battery Springer. That is you can find the remains if you don’t mind a little off trail hiking. Unfortunately today, both these batteries are currently being used by the National Park Service for storage purposes and are not actually open for visiting.

Located nearby to Batteries Livingston and Springer, one will find the last original building from the original fort. Originally a storehouse, the building is now also being privately used by the National Park Service.

Unfortunately, for all of its history, very little of Fort Miley still exists today. It has instead become better known for the Veterans Affairs Hospital which now occupies the site.

Located directly next to the large parking area is the memorial to the World War Two cruiser, USS San Francisco. Created out of actual battle damaged pieces of the ship’s flag bridge, the memorial honors the men who served aboard her and focuses on the events of November 12 and 13, when the USS San Francisco came under attack during the naval Battle of Guadalcanal.

In addition, separate plaques on the memorial honor Rear Admiral Daniel J. Callaghan (whose flagship was the USS San Francisco) and Boatswain’s Mate 1stClass Reinhardt John Keppler (who received the Medal of Honor for his actions during the battle), both of whom were among those who died as a result of the battle. In addition to being a historical site, Fort Miley is also a great place to go hiking. One thing that did strike us immediately about the trails along the coast of Land’s End was just how quiet and peaceful it was. San Francisco, like all cities, can be a really loud and noisy place. However secluded on these trails, the only thing you are likely to hear are the waves of the nearby ocean.

You will also have a chance to learn more about the gateway to the San Francisco Bay courtesy of several informational markers which carry information such as the early lighthouses that were established at the Golden Gate and various shipwrecks which occurred at in the mouth of the bay, some of which can still be seen today when the tides are right.

I do have a word of warning, though. Parts of the trail that include steps can give you quite a workout, especially for those who may not be in the best athletic shape.

Getting back to the point of our visit, taking the coastal trail will eventually get you to a location where you will have a wide open view of the Golden Gate Bridge. Unfortunately when wanting to take a shot of the bridge, weather must be taken into account and unfortunately our visit was disrupted by the usual San Francisco fog. As a result, our photograph of the bridge did not go so well. As a fun little addition, you can also take a few moments to play in a little maze that has been constructed at the viewpoint. A nearby trail will also take you down to a beach where the remains of campfires hint to it having been enjoyed by previous visitors.

The California Beat visited Fort Miley to decide whether it was good enough to be included in our listing of the best places from which to photograph the Golden Gate Bridge. After consideration, we have decided that while it isn’t the very best location to photograph the bridge, it still can present a good location to consider trying, providing that the weather is perfect.