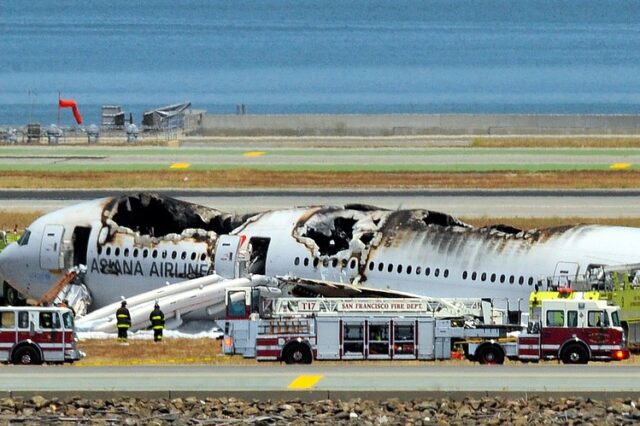 The plane — Asiana Flight 214, inbound from Incheon, South Korea — was attempting to land at the airport when it crashed and caught fire. The Boeing 777-200 was nearly full, carrying 291 passengers and 16 crew members.

Asiana Airlines officials identified the two deceased passengers as Ye Meng Yuan and Wang Lin Jia, both 16, of China who was traveling to Los Angeles to attend summer camp. Both were sitting towards the rear of the airplane when it crashed.

“Much hasn’t been said about the [Asiana flight] crew,” said San Francisco Police chief Greg Suhr, during an evening press conference. “From talking to our folks, the crew was heroic in this, making sure all the [passengers] got out.”

San Francisco Fire Department chief Joanne Hayes-White said that by the time firefighters responded to the scene, the plane’s emergency slides had already been deployed and passengers were using them to escape.

In the aftermath of the crash, the seriously injured passengers were rushed to Bay Area trauma centers and a U.S. Coast Guard vessel was dispatched to search the bay for anyone who may have been thrown into the water when the plane broke apart and the National Transportation Safety Board announced it was sending a “go-team” to investigate the accident.

The team arrived at the airport late Saturday night. The airplane’s cockpit voice and flight data recorders have both been recovered and were awaiting examination.

Many of the most serious injuries were taken to San Francisco General Hospital, which received 10 passengers in critical condition after the crash — five of those passengers had been upgraded to serious condition by Saturday evening, said a hospital spokeswoman. The number of passengers receiving treatment at San Francisco General eventually grew to 52, as another 42 passengers arrived at the hospital in three different waves throughout the afternoon, she said, adding that at least 11 of those were children. Those 52 people accounted for a little more than a quarter of the 182 people who were injured in the crash and were taken to hospitals, mostly those in San Francisco and in San Mateo County. Officials said the 49 people who were seriously injured by the crash were the first transported to hospitals after emergency responders arrived at the wreckage.

A photo from the wreck seems to show that the main fuselage appears to be mainly intact just after the crash, though aerial pictures show that sections of it were eventually heavily damaged by fire. The tail section of the plane broke off during the crash. Another photo taken of the airport from a distance immediately after the crash, showed smoke billowing down one of the runways. Additionally, video from then showed a thick plume of smoke rising from the aircraft, off runway 28L in SFO.

“The accident occurred when the aircraft’s tail struck the runway on landing, which led to a fire on the aircraft,” Asiana Airlines CEO Yoon Young-Doo said during a press conference from Seoul. “The aircraft was landing on the correct runway as it was instructed by the control tower at San Francisco International Airport.”

He said Asiana Airlines had dispatched its own investigators to San Francisco to try to determine the cause.

About four hours after the plane crash, San Francisco airport authorities reopened two of the airport’s four runways. Planes attempting to land at SFO in the aftermath of the crash were diverted to other airports, mostly in the Bay Area. The airport advises travelers check with their airlines for information about specific flights.